Calypte anna
Apodiformes
The order, Apodiformes, contains the swifts and hummingbirds, birds that at first glance seem to have little in common. Both groups, however, are similar in the structure of their wings, modified for very rapid movement and both have tiny legs. Both swifts and hummingbirds also have only 10 tail feathers, not 12 like most other birds, and they share similarities in cranial structure. Swifts are found over much of the world, but hummingbirds are found only in the Americas. Both families are represented in Washington:
Trochilidae
Hummingbirds are tiny, nectar- and insect-eating birds. Their unique manner of flight allows them to fly forwards, backwards, or hover in one spot. Hummingbirds are found only in the Western Hemisphere, and most are found in tropical areas. Of the species that live in Washington, all but one migrate south in the winter. Male hummingbirds often have an iridescent throat patch called a "gorget." The females build the nests, incubate, and feed the young without assistance from males. Hummingbirds are among the smallest of warm-blooded animals and often consume more than half their total weight in food and twice their weight in water in a single day.
Fairly common resident west. Rare east.
Source of Bird Audio

The Anna's Hummingbird is a medium-sized hummingbird with a relatively short, straight bill and a long sloping forehead. Both males and females are bronze-green above, and gray below. Males are easy to distinguish from other hummingbirds as their entire heads and throats are bright iridescent red. Female have green heads, with a small amount of red on their throats. Females have black tails with white tips, while the males' tails are solid blackish-gray.

Anna's Hummingbirds live in a wide variety of habitats, including open woods. Chaparral is their traditional habitat, although in recent years they have been found more often in suburban gardens where hummingbird feeders and exotic plantings provide them with food throughout the year. In Washington, Anna's Hummingbirds are most often found in suburban parks, gardens, and coastal valleys.

One of the most distinctive behaviors of the Anna's Hummingbird is the male's courtship flight dive. He flies high in the air and then plummets. At the bottom of the dive, he makes a loud, distinctive popping noise, called the "dive noise." The origin of the dive noise is not fully understood, but is thought to be mostly vocal. The vocalization may or may not be supplemented with noise from air rushing through the feathers. In addition to the dive noise, the very vocal Anna's Hummingbird makes a variety of buzzes, chips, and chatters. Both males and females defend feeding territories, although males defend them more diligently and for a longer period of time.

Anna's Hummingbirds feed on nectar from flowers and feeders, as well as small insects and spiders that they catch in the air or glean from tree trunks and branches. They also visit sapsucker holes and feed on sap and insects attracted to the holes.

Males and females do not form lasting pair bonds. Females construct the nest, incubate the eggs, and feed the nestlings on their own. They build their nests on a wide variety of surfaces, most often on the branch of a shrub or tree at heights varying from 3-27 feet from the ground, situated near suitable food sources. Nests are cup-shaped, made of plant fibers, spider webs, and feathers, with a lichen exterior. The female incubates two eggs for 14-19 days. She feeds and cares for them by herself until they become independent at 18-23 days.

Historically limited to western California, in recent years Anna's Hummingbirds have dramatically expanded their range northward as far as British Columbia. This expansion has been attributed to hummingbird feeders and gardens with exotic flowers that provide the birds with a year-round food source. Climate change may also play a role. They are currently very common across much of their range, and because they adapt well to suburban areas, should continue to thrive in the future.

The first breeding record in Washington was in Tacoma (Pierce County) in 1976, and they are now found breeding throughout the lowlands of southeastern Puget Sound (from Edmonds in Snohomish County to Tacoma in Pierce County). Non-breeding populations can be found in riparian areas throughout the Columbia Basin. Christmas Bird Counts document the presence of Anna's Hummingbird throughout western Washington in the winter. 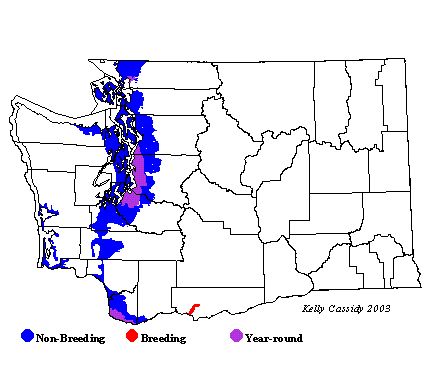