Columba livia
Columbiformes
Plump birds with dense plumage, pigeons and doves have small heads and short legs. They are predominantly buff or gray, but many species have colorful accents on the neck, head or breast. These accents are often somewhat more prominent in males, but sexes are generally similar. This order has a single family:
Columbidae
Most of the members of this group live in tropical or semi-tropical parts of the world. The term "pigeon" refers to the larger and "dove" to the smaller species in this group, although this usage is not consistent. Most pigeons and doves have plump bodies and soft plumage. The Washington members of this group are drab, but some have iridescent patches. Pigeons and doves are all strong fliers. One unique trait of this family is the ability to drink without tipping the head back, something no other bird can do. Pigeons and doves feed on seeds and fruits. Unlike many granivorous birds that switch to a diet of insects when raising young, pigeons have a unique system for feeding their young. Both males and females produce in their crops a protein- and fat-rich liquid called "pigeon milk," which they feed to their young. Most pigeons and doves lay clutches of one or two eggs.
Common resident.
Source of Bird Audio

Rock Pigeons, more commonly known simply as just "pigeons," are familiar birds in any developed area. Chunky birds with sharply pointed wings, Rock Pigeons are found in a variety of colors and patterns, although all gray is most common. Rock Pigeons have black bills with white fleshy bases, red eyes, red fleshy eye-rings, and salmon-colored feet.

Rock Pigeons are found in a wide variety of habitats, especially suburban, urban, and agricultural environments. Their original native habitat is cliff-sides, and Rock Pigeons can be found in eastern Washington nesting on cliffs.

Rock Pigeons are fast fliers and are usually seen in flocks. They forage mostly on the ground, but occasionally forage in trees as well. Unlike their agile, native cousin, the Band-tailed Pigeon, Rock Pigeons move about only clumsily in trees. Large groups often congregate along utility wires, window ledges, and rooftops.

Seeds and grain make up most of the Rock Pigeons' diet on farms, but in cities, popcorn, bread, and other human food is usually part of their diet.

In urban and suburban areas, Rock Pigeons nest on a variety of covered, flat surfaces, including ledges and beams in bridges and buildings. In natural areas, they nest on sheltered cliff-ledges. Pairs may form long-term bonds. The male supplies nesting material, and the female builds the nest, a platform of twigs and grass. Nest sites are used repeatedly and nesting material is added for each new brood. A pair may raise 5 or more broods a year. Both parents incubate the 2 eggs for 16-19 days, and both feed the young 'pigeon milk," a protein and fat-rich liquid produced in their crops. At about 4 weeks of age, the young leave the nest.

Rock Pigeons do not migrate. However if displaced from a nesting area, they have a good homing ability and can return from long distances. It is thought that this ability evolved to help them find their own nests on cliffs covered with large colonies of similar looking nests.

Originally from Europe, Northern Africa, and India, the Rock Pigeon was domesticated and raised for food and trained for homing. Early European settlers at Jamestown and Plymouth introduced it to North America in the 1600s. All of the birds in North America and most of the European populations are descended from domestic stock. Numbers have increased significantly as more and more of our country is urbanized. While Rock Pigeons can be a nuisance, they do not negatively affect native species, since they are predominantly found in disturbed environments. In fact, since Peregrine Falcons living in urban areas prey predominantly on them, the abundance of Rock Pigeons has assisted the comeback of the falcon .

Rock Pigeons are widespread and common year round at lower elevations throughout Washington, especially in cities and farms. In eastern Washington they are also found on basalt cliffs along the Columbia River in the Columbia National Wildlife Refuge (Grant County). They are absent from heavily forested areas. 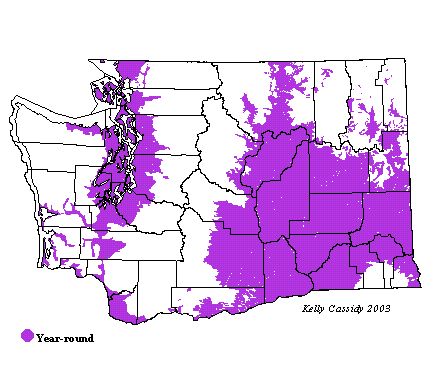