Dendroica petechia
Passeriformes
Members of this diverse group make up more than half of the bird species worldwide. Most are small. However their brains are relatively large and their learning abilities are greater than those of most other birds. Passerine birds are divided into two suborders, the suboscines and the oscines. Oscines are capable of more complex song, and are considered the true songbirds. In Washington, the tyrant flycatchers are the only suboscines; the remaining 27 families are oscines.
Parulidae
This large group of small, brightly colored songbirds is a favorite of many birdwatchers. Wood-warblers, usually called “warblers” for short by Americans, are strictly a New World family. Most of the North American members of this group are migratory, returning in the winter to the tropics where the family originated. Warblers that nest in the understory tend to have pink legs and feet, while those that inhabit the treetops usually have black legs and feet. North American males are typically brightly colored, many with patches of yellow. Most North American warblers do not molt into a drab fall/winter plumage; the challenge posed to those trying to identify warblers in the fall results from looking at mostly juvenile birds. Their songs are generally dry, unmusical, often complex whistles (“warbles”). Warblers that live high in the treetops generally have higher-pitched songs than those that live in the understory. Warblers eat insects gleaned from foliage or captured in the air. Many supplement their insect diet with some seeds and fruit, primarily in fall and winter, and some also eat nectar. Most are monogamous. The female usually builds the nest and incubates four to five eggs for up to two weeks. Both members of the pair feed the young.
Common summer resident.
Source of Bird Audio

Yellow Warblers are bright yellow birds. Their upperparts have a slight greenish tinge, and their tails are greenish yellow. Their heads and faces are plain, without lines or streaks. Males have reddish streaks down their breasts and bellies. Females are also yellow, but not as bright as males, and they lack red streaks. Females and immatures show a fine, yellowish eye-ring. First-year birds are drab yellow-gray, with yellow undertail coverts.

Throughout their range, Yellow Warblers use a variety of brushy habitats on forest edges. In Washington, their breeding habitat is restricted to hardwood thickets near water, especially those with willow, alder, and cottonwood. They use similar habitat during migration, but can be found in more varied habitats also. In winter, they can be found in semi-open tropical habitats and are often associated with mangroves.

Yellow Warblers forage at various levels in the vegetation, although males generally forage higher than females. They glean prey from small limbs and foliage, but also fly out to catch prey in midair. They can be difficult to see because they generally inhabit dense vegetation, but during the breeding season, the males' distinctive song is a helpful way to locate them.

Yellow Warblers are primarily monogamous and form pair bonds soon after females arrive on the breeding grounds (about ten days behind males). The female builds the nest, often in an upright fork in a tree or shrub. The nest is made of bark and grass, and lined with plant down and hair. The male brings food to the female while she incubates 4 to 5 eggs for 11 to 12 days. Both parents feed the young, which leave the nest 8 to 10 days after hatching. The parents continue to feed the young for up to three weeks after they leave the nest.

Yellow Warblers are one of the most common and widely distributed warblers in North America. They are a common host for the nest parasite, the Brown-headed Cowbird. However, Yellow Warblers may respond aggressively to cowbirds near their nests, and will sometimes build new nests over nests with cowbird eggs. Cowbirds can have adverse effects on localized Yellow Warbler populations, although it is not likely that cowbirds have a significant impact on the population as a whole at this time. Yellow Warblers' use of edge and second-growth habitat enables them to survive in logged and developed areas. In Washington, livestock grazing along willow-lined rivers damages habitat, and Yellow Warblers have declined along some rivers and creeks in the Columbia Basin. According to the Breeding Bird Survey, the Washington population declined significantly from 1966 to 1979, but has rebounded since then, with a statewide, non-significant increase since 1980. 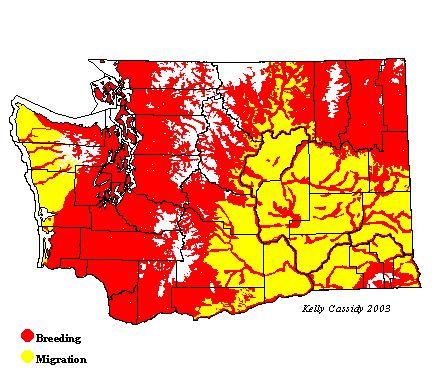