Tachycineta bicolor
Passeriformes
Members of this diverse group make up more than half of the bird species worldwide. Most are small. However their brains are relatively large and their learning abilities are greater than those of most other birds. Passerine birds are divided into two suborders, the suboscines and the oscines. Oscines are capable of more complex song, and are considered the true songbirds. In Washington, the tyrant flycatchers are the only suboscines; the remaining 27 families are oscines.
Hirundinidae
Swallows are small, graceful birds with long, pointed wings, tiny bills, and small feet. They eat flying insects and forage over open water or ground. Many are well adapted to living near humans and use man-made structures for nesting. Swallows make their nests out of mud attached to a structure, or build in sandy burrows or in available cavities. Most swallows are social, foraging and migrating in flocks; many nest colonially, but a few are solitary. Most are monogamous, although extra-pair copulations are common in many species. The males of some species help incubate the eggs while others do not. Both parents provide care for the young. All North American species migrate.
Common summer resident.
Source of Bird Audio

Tree Swallows are elegant birds with white undersides, iridescent blue-green backs, and moderately forked tails. Seen in profile, this swallow has a sharp line of demarcation between the dark of the head above the eye and the pure white of the rest of the face and underparts. In Washington, Tree Swallows are most likely to be confused with Violet-green Swallows, but Violet-green Swallows have white patches extending up the sides of the rump that can be seen in flight. The white on the faces of Violet-green Swallows extends above their eyes. Male and female Tree Swallows in adult plumage look similar to each other, but Tree Swallows are unique in that first-year females, although reproductively mature, have a different plumage from older birds. This plumage is similar to the juvenile plumage--non-iridescent brownish-gray above with a grayish-white belly. Juveniles have a grayish breast-band that first-year females lack. Juveniles could be mistaken for Bank Swallows, but the breast-band of Bank Swallows is more distinct than that of juvenile Tree Swallows.

When nesting, Tree Swallows are usually found near water. They require nest cavities, either natural or man-made. Often these cavities are situated over or immediately adjacent to water.

Flying insects make up most of the Tree Swallow's diet, although more than any other Washington swallow, the Tree Swallow eats berries and other vegetative matter when insects aren't flying. This allows the Tree Swallow to weather cold spells better than other swallows, which in turn allows it to winter farther north.

Tree Swallows are mainly monogamous, but extra-pair copulations are common. They nest in cavities--natural tree cavities, old woodpecker holes, or man-made nest boxes. Nests are located singly or in loose colonies. The male brings nesting material to the female, and she does most of the construction. The nest is a cup of grass, weeds, and other plant material, lined with feathers. The female incubates four to seven eggs for 14 to 15 days. Both parents feed the young, which leave the nest at 18 to 22 days. Parents continue to feed the young for at least three days after they leave the nest.

Tree Swallows are migrants, but do not migrate as far as other swallow species since they are not entirely dependent on flying insect prey. They migrate in loose flocks by day and gather in large groups to roost at night. They arrive in March, quite early in the spring. Most leave by mid-August, although a few can usually be found through September. Tree Swallows winter from North Carolina, the Gulf Coast, and Southern California to Cuba and Guatemala.

According to Breeding Bird Survey data, Tree Swallows have increased (although not significantly) in Washington between 1980 and 2002. While the popularity of bluebird houses has provided many nest boxes for Tree Swallows, competition with European Starlings and House Sparrows for these and other cavities keeps the population in check. Relatively high levels of pesticides have been found in some western populations, and Tree Swallows are often used as indicator species for pollutants.

Tree Swallows are common in many open areas and wetlands throughout Washington from March through mid-August. 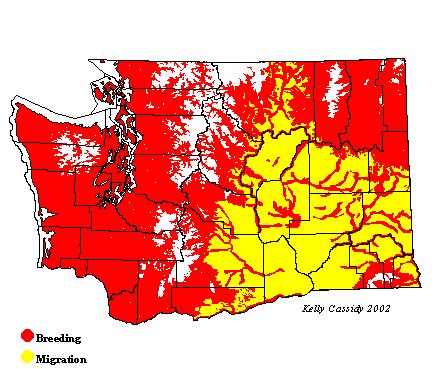