Tympanuchus phasianellus
Galliformes
This group, the "chicken-like" birds, consists of medium to large terrestrial birds. They are quick flyers, better adapted for short bursts of speed than sustained flight. They are fast runners and spend much of their time on the ground. Washington has two families:
Phasianidae
Pheasants, partridges, grouse, and turkeys are mostly ground-dwelling birds, although many forage or roost in trees during the winter. They do not migrate long distances, although they often use different habitats seasonally. They are omnivores, eating mostly plant matter in the winter and insects in the summer. Many of the males in this family have loud and dramatic displays. Nests are built on the ground, and clutch size is usually large. The young are precocial, able to walk and feed themselves within a few hours of hatching.
Rare resident east.
Source of Bird Audio

The Sharp-tailed Grouse is a large grouse with a sharply pointed tail, held straight up when displaying. It is brown with white and dark spots, arranged in cryptic patterns. The bird has light-colored undersides and a slight crest on its head. Yellowish eyebrows and pinkish-purple air sacs at the sides of its neck are visible on the male when he displays.

Sharp-tailed Grouse live in grassy areas with patches of trees in the northern Columbia Basin. Their primary habitat is the grass and shrub savanna in the three-tip sage and central arid steppe zones. They are also found in grassy openings in the lowest edges of the Ponderosa pine zone. In summer they spend most of their time in more open grasslands, while in the winter they make use of trees and shrubs for cover.

Males gather on a communal breeding ground, or lek, to display for females. When displaying, males point their tails up, spread their wings, hold their heads low, and stamp their feet. While doing this, they inflate and deflate the air sacs in their breasts, creating a booming sound.

In the spring, Sharp-tailed Grouse forage mostly for leaves, green shoots, and flowers. In the summer, they forage on the ground, with blades of grass making up over 50% of their diet. Flower parts make up another 25% of the breeding-season diet. Insects, especially grasshoppers, are also an important food item at this time of year, particularly among the young. In the fall, the diet becomes more varied and is made up of seeds, berries, leaves, and waste grains. In the winter, Sharp-tailed Grouse forage in trees and shrubs for buds.

The female selects a male at the lek, mates with him, and then leaves to find a nesting spot. Nests are typically a shallow depression located on the ground under a shrub or thick clump of grass, often sparsely lined with grass, leaves, or ferns. She lays an average of 12 eggs (ranging from 5-17). Shortly after hatching, the young leave the nest. The female continues to tend the young and lead them to feeding areas, although they feed themselves.

There is no major migration, although they may move several miles between seasons to reach optimal habitats for summer and winter.

The Columbian subspecies historically ranged from southern British Columbia, along the eastern slope of the Cascades south to California, and east to Colorado and Utah. In Washington, they currently remain in only eight isolated populations in Douglas, Lincoln, and Okanogan Counties. The areas with the largest subpopulations are Dyer Hill in Douglas County, Swanson Lakes in Lincoln County, Tunk Valley, and Nespelem in Okanogan County. 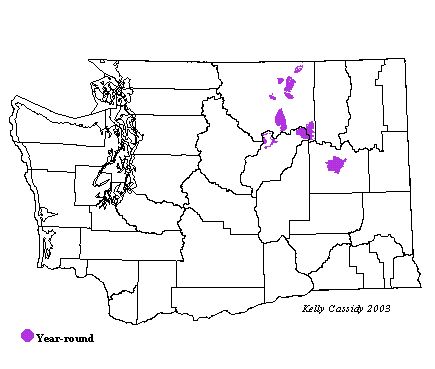