Numenius americanus
Charadriiformes
This is a large and highly varied group of birds that do not have many outward similarities. Most are water birds that feed on invertebrates or small aquatic creatures. The order is well represented in Washington, with seven families:
Scolopacidae
This large and diverse family of shorebirds is made up mostly of northern breeders that migrate long distances. Their highly migratory nature leads them astray fairly frequently, and rarities often show up outside their normal range. Many of these mostly coastal birds forage in relation to the tides, rather than the time of day. They use a variety of foraging techniques, but the most common techniques are picking food from the ground or water, or probing into wet sand or mud. Those that probe generally have sensitive bills that open at the tips. Most members of this group eat small invertebrates. Many make dramatic, aerial display-flights during courtship. Nesting practices vary, but both parents typically help raise the young. Clutch size is usually four, and both parents generally incubate. The young are precocial and leave the nest within a day of the hatching of the last chick. Most feed themselves, although the parents generally tend the young for a varying period of time. The female typically abandons the group first, leaving the male to care for the young until they are independent.
Uncommon summer east. Uncommon winter west.
Source of Bird Audio

The Long-billed Curlew is the largest North American shorebird. It has a very long, decurved bill, which is longer on adult females than on males and juveniles. It is mottled brown overall, with cinnamon underwings. Sometimes a striped head pattern is evident, but it is far less pronounced than the head stripes on the Whimbrel. It is similar in size, shape, and color to the Marbled Godwit, but the curlew's decurved bill distinguishes it from the upturned bill of the Marbled Godwit.

Dry grasslands and shrub savannahs are the traditional breeding habitats of Long-billed Curlews. They also nest in grain fields and pastures. During migration and winter, they can be found on coastal mudflats and marshes, and less commonly in fields and grasslands.

These birds often gather in small flocks and forage by walking quickly along with their long bills extended forward, probing for food.

In summer, earthworms and other invertebrates are common prey. Berries may also be important food at certain times of the year. Birds in coastal areas eat crabs and other aquatic creatures.

Males attract females and defend their territories with undulating flight displays, fluttering and gliding while calling. The nest is on the ground in the open, but is often located next to an object such a rock, a shrub, or even a pile of cow manure. The nest itself is a shallow scrape, usually sparsely lined with vegetation, sometimes with a rim built up around the edge. Both parents help incubate the four eggs for 27-30 days. The young leave the nest shortly after hatching and feed themselves, although both parents tend them and lead them to a marshy or damp area to find food. The young begin to fly at 32-45 days.

This short-distance migrant is one of the earliest breeding shorebirds, returning from wintering grounds from California to Mexico in mid-March, before their nesting grounds dry out. The adults leave by mid-July, with the young of the year leaving in mid-August.

Once abundant, Long-billed Curlews declined as a result of hunting in the 1800s. Protection has helped the birds rebound, and now habitat destruction is their biggest threat. As more and more native grassland is converted to agriculture, the amount of potential Long-billed Curlew nesting habitat is shrinking. The Canadian Wildlife Service estimates the current population at about 20,000 birds.

Long-billed Curlews breed in eastern Washington in the central Columbia Basin and up through the Okanogan Valley. They are uncommon throughout the state during migration. They generally winter south of Washington, but a flock winters around Tokeland at Willapa Bay (Pacific County) every winter. Bill's Spit at Ocean Shores is another place to look for them. 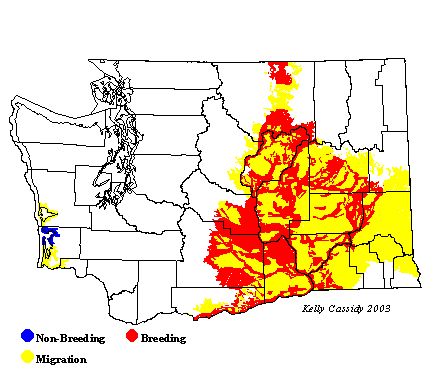