Picoides albolarvatus
Piciformes
Most birds in this group are adapted for climbing and perching in trees and range widely in size. The feet of most species have two toes pointing forward and two pointing back, a special adaptation for trunk-climbing known as a zygodactyl arrangement. The order includes families as diverse as the puffbirds and the toucans, but only the woodpecker family is found in Washington:
Picidae
Woodpeckers have many adaptations that allow them to perch upright against tree trunks and feed on insects under the bark or within the wood of the tree itself. Further specialization has produced many aberrant forms with different behavior and feeding habits. Most use their strong claws and stiff tail feathers to brace themselves against tree trunks as they climb. The specially adapted skulls of woodpeckers allow them to pound hard on tree trunks to excavate nesting and roosting cavities, to find food, and to communicate and attract mates. A special arrangement of bones and elastic tissues allows woodpeckers to extend their long tongues and extract insect prey from the holes they chisel with their strong, sharp beaks. The principal food of most woodpeckers is insects, especially the larvae of wood-boring beetles. A few woodpeckers feed on ants, nuts, or flying insects. Many also take a small amount of fruit. Most woodpeckers have rounded wings and an undulating flight pattern. The plumage of most is some combination of black and white, though brown is not uncommon. Many, especially males, have small patches of red or yellow on their heads. Although they may appear to damage trees, woodpeckers are generally good for tree health because they feed so heavily on wood-boring beetles. Most woodpecker species are monogamous, and many form long-term pair bonds. The nests are usually lined with nothing but the woodchips created by excavating the nest cavity, which is excavated by both members of the pair. Both sexes incubate the eggs, with males generally taking the night shift. Both sexes also feed and tend the young.
Uncommon resident east.
Source of Bird Audio

The White-headed Woodpecker is the only North American woodpecker with a black body and a white head. It has white wing-patches at the wrists, visible both when the bird is perched and when it flies. Males have a red patch on the back of their crowns.

This species is restricted to relatively open Ponderosa pine forests at altitudes from 2,000 to 5,000 feet. In Washington, White-headed Woodpeckers are seldom found in coniferous forests higher than the Ponderosa pine zone. This is one of the most tree-specific of the woodpeckers.

White-headed Woodpeckers forage for insects on trunks and limbs as well as in clusters of needles. Because they pry rather than hammer bark from trees and forage by excavating cones, their foraging tends to be quieter than that of other woodpeckers. They do, however, drum during courtship like other woodpeckers.

White-headed Woodpeckers feed on insects and on pine and other conifer seeds. They rely heavily on seeds during fall and winter, more so than any other North American woodpecker except perhaps the Acorn Woodpecker.

Cavities are typically excavated in dead or diseased trees, often within 10 feet of the ground, lower than those of many other woodpeckers. Although cavities are not reused from year to year, the same tree will often be reused. Both sexes excavate the cavity, and both sexes incubate and feed the 4-5 young. Incubation typically lasts about 14 days, and young fledge at about 26 days.

White-headed Woodpeckers are generally considered permanent residents, but they are much harder to find during winter, and many may leave the region during this time.

Modern forestry practices and fragmentation of the Ponderosa pine forests have contributed to declines in Washington. White-headed Woodpeckers are currently candidates for listing on the state endangered species list. They are listed as a species-of-concern by Partners in Flight, Audubon~Washington, and the Washington State Gap Analysis project. Protection of Ponderosa-pine habitat, modification of fire-suppression strategies, and retention of snags should help conserve this species.

White-headed Woodpeckers are uncommon and local in the Ponderosa-pine forests of the eastern Cascades. They are most easily located in Yakima and Klickitat Counties. They are also uncommon east of the Okanogan River and occur rarely in some areas of the Blue Mountains. Specific sites where White-headed Woodpeckers may be found include the Wenas Campground (Yakima County), the Yakama Indian Reservation (Yakima County; no public access), Little Pend Oreille National Wildlife Refuge (Stevens County), Long Lake Dam (Lincoln/Stevens County), and Fields Spring State Park in the Blue Mountains (Asotin County). 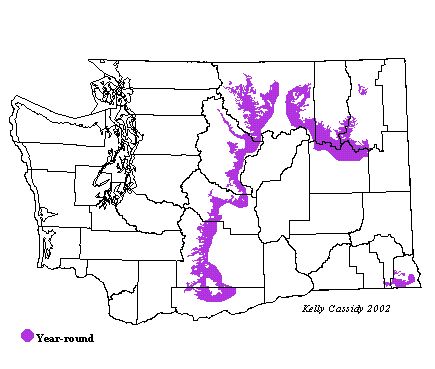