Sturnella neglecta
Passeriformes
Members of this diverse group make up more than half of the bird species worldwide. Most are small. However their brains are relatively large and their learning abilities are greater than those of most other birds. Passerine birds are divided into two suborders, the suboscines and the oscines. Oscines are capable of more complex song, and are considered the true songbirds. In Washington, the tyrant flycatchers are the only suboscines; the remaining 27 families are oscines.
Icteridae
This New World family of medium and large songbirds is very familiar, as most species are common inhabitants in human-altered settings. Many are partly to entirely black, often with iridescence or bright markings of some sort. Most blackbird species form flocks at certain times of the year, and many form multispecies flocks. Blackbirds live in open habitats and eat seeds, grain, and insects. They often forage in agricultural areas, where they can be considered pests. These birds generally forage on the ground where they are well adapted for a behavior called gaping. They insert their long, slender bills into the ground, and then open their bills to get at underground insects. Blackbirds also use this technique to get into fruits and some insects, and to reach insects that are cocooned inside wrapped leaves. Most build open-cup nests in trees, shrubs, or on the ground. Many members of this family are polygynous. Females generally build the nests and incubate the eggs, and males help feed the young.
Common summer east, uncommon west. Fairly common winter, mostly west.
Source of Bird Audio

Western Meadowlarks look distinctively different from other members of the blackbird family in Washington. They have streaked brown upperparts and solid yellow underparts with a distinct black collar. The yellow and black are both more intense during the breeding season. They have long legs and short tails with white outer tail-feathers that are obvious in flight.

Meadowlarks are open-country birds. They inhabit grasslands, shrub-steppe, and agricultural areas. During winter, they can often be found in cultivated fields and wet grasslands.

Western Meadowlarks flock in winter in single-species groups, or with other blackbirds and starlings. Meadowlarks forage mostly on the ground, running or walking, and probing the soil with their bills. In early spring, Western Meadowlarks sing continually from shrub tops, fence posts, utility poles, or any other high structure in their open-country habitat.

During the summer, insects make up most of the diet. In fall and winter, seeds and waste grain become more important.

Western Meadowlarks nest on the ground, often in small dips or hollows, such as those created by cow footprints. Nests are typically under dense vegetation and can be very difficult to find. Western Meadowlarks are polygynous. Successful males generally mate with two females at a time. Females build the nests, which are grass domes with side entrances. The nest materials are often interwoven with adjacent growth, and small trails may form through the grass to the nests. Females incubate 4 to 6 eggs for 13 to 14 days. The females brood the young after they hatch and provide most of the food, although the male may help. The young leave the nest 10 to 12 days after hatching. They cannot fly at this age but can run well, and, with the help of cryptic plumage, can hide successfully in the grass. Females often raise two broods a season.

Western Meadowlarks are resident throughout much of their range, but when deep snow covers food sources they may move into sheltered valleys. Some populations appear to be long-distance migrants.

Western Meadowlarks are abundant and widespread, but breeding populations have declined slightly throughout their range in recent years, a trend seen in Washington in both the winter and breeding seasons. Most of this decline can probably be attributed to habitat destruction from livestock grazing, mowing, and development, and contamination from pesticides. In northeastern Washington, the conversion of forested river valleys to agricultural uses may be increasing available habitat, but western Washington populations have declined significantly in recent years as the remaining prairie in this part of the state is developed, degraded by invasive plants, or altered by fire suppression. Western Meadowlarks are extremely sensitive to human disturbance during the breeding season and will abort nesting attempts if they are flushed while incubating eggs.

During the breeding season, Western Meadowlarks can be found in open lowlands throughout the state, but are most abundant in eastern Washington. Western Washington breeders are rare to uncommon, and are locally distributed in the Puget Trough, the Vancouver lowlands, and Sequim, where they remain year round, and are joined in winter by birds from the north and east. Most leave eastern Washington locations, although some may overwinter near feedlots in the Columbia and Snake River valleys. They start to return to the shrub-steppe zone in late February, and are common by mid-April. 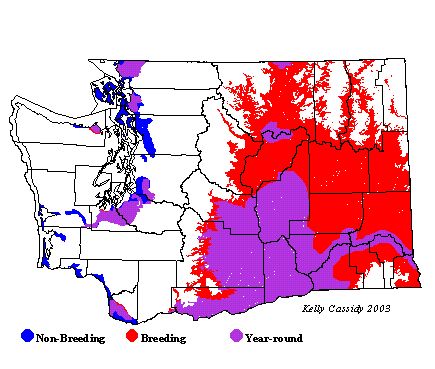