Larus delawarensis
Charadriiformes
This is a large and highly varied group of birds that do not have many outward similarities. Most are water birds that feed on invertebrates or small aquatic creatures. The order is well represented in Washington, with seven families:
Laridae
The family Laridae is made up of birds closely associated with water. Distributed throughout the world, representatives of this family nest on every continent, including Antarctica. Most are long-lived birds, many of which do not breed until they are three or four years old. Most are colony nesters and nest on the ground. Clutch size is generally small, varying from one to four eggs. Both parents incubate the eggs and help feed the young. The young typically hatch covered with down and stay in the nest for a few days, after which they leave the nest but stay nearby. Most, especially in Washington, raise a single brood a year. This group is known for its elaborate displays in the air and on the ground.

The Washington representatives of this family can be split into two groups, or subfamilies. The adaptable gulls are the most familiar. Sociable in all seasons, they are mainly coastal, but a number of species also nest inland. Many—but not all—are found around people. Gulls have highly variable foraging techniques and diets. Terns forage in flight, swooping to catch fish or insects. They dive headfirst into the water for fish. Although they are likely to be near water, they spend less time swimming than gulls.
Common resident.
Source of Bird Audio

A medium-sized, white-headed gull, the Ring-billed Gull appears similar to the Herring and California Gulls, but is smaller, with a shorter bill that has a broad, black ring around it. The Ring-billed Gull is slightly larger and bulkier than the Mew Gull. The white body and tail, slate-gray back and wings, and black wingtips with large, white spots (windows), typical of most gulls, are all present on the Ring-billed Gull. The juvenile is mottled brown mixed with adult plumage characteristics. It has pink legs and a pink bill with a dark tip. As the bird matures, the legs turn yellow, and the bill becomes yellow with a black ring. The adult's eye is also yellow. The adult in non-breeding plumage has brown streaking on its head. The Ring-billed Gull takes three years to reach maturity.

Ring-billed Gulls are found in a wide variety of habitats and occur over much of inland North America. They are usually found near fresh or salt water, and take advantage of foraging opportunities in developed areas such as parking lots, restaurants, garbage dumps, and agricultural areas. They also inhabit more natural areas such as coasts and bays. They are rarely found far offshore.

Like most gulls, Ring-billed Gulls are gregarious, adaptable, and opportunistic. They do much of their feeding on land, but also forage while wading, swimming, or flying. These gulls spend a considerable amount of time scavenging and often steal food from other birds. They congregate at sewage ponds and in agricultural fields, where they follow plows, picking up insects and small rodents.

The Ring-billed Gull can be found in mixed colonies with larger gulls, where they are often forced to use sub-optimal habitat close to the water, and their nests are at risk of flooding. Colonies are located on low-lying, sandy islands, and nests are built on the ground. Both members of a pair help build a small nest of grass and twigs. Both help incubate the 2-4 eggs for 4 weeks, and both help brood and feed once the young hatch. The young may wander out of the nest after 2 days, but will stay close until after they fledge at about 5 weeks. Nests with more than four eggs are usually the result of two females sharing a nest.

Ring-billed Gulls migrate in flocks, following coastlines and major river valleys. In Washington, many winter residents are present along the coastline. Breeders in eastern Washington may stay in the lowlands year round, but many migrate to the coast.

The Ring-billed Gull population suffered a major decline at the beginning of the 20th Century because of hunting, but it has since rebounded and is currently thriving throughout its range, so much so that it is considered a nuisance in some areas. Much of the current population boom can be attributed to its ability to exploit food sources such as garbage dumps, large-scale agricultural operations, and irrigation facilities. In 1990, the North American population of Ring-billed Gulls was estimated at 3-4 million and growing. The first breeding colonies in this state were in eastern Washington and were established as early as 1930. Ring-billed Gulls did not colonize western Washington until 1976, when the first pairs nested at Willapa Bay and Whitcomb Island in Grays Harbor. Dam projects in eastern Washington have helped the population continue to grow in that part of the state. The population has grown in western Washington as well, but competition with larger gull species may restrict this growth. 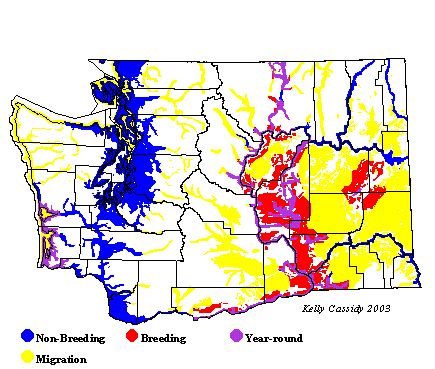