Falco rusticolus
Falconiformes
The hawks, eagles, falcons, and allies make up a group known as the diurnal raptors, because they are active during the day. Members of this group typically use their acute vision to catch live vertebrate prey with their strong feet and toes. They vary from medium-sized to large birds and most have an upright posture and strong, short, hooked bills. The New World vultures (not closely related to the Old World vultures) were once classified with the herons and allies, but they have provisionally been grouped with the diurnal raptors on the basis of recent genetic studies. Members of the order Falconiformes in Washington fall into three families:
Falconidae
This widespread and diverse family of predatory birds is divided into two groups. Some of the fastest-flying birds can be found in the falcon group. Built for speed, most falcons have pointed wings and long tails. Many catch avian prey in flight, but others prey on large insects, mammals, and ground-dwelling birds. Members of the caracara group are more opportunistic, taking carrion as well as live prey and often foraging on the ground. Regardless of the approach, members of this family almost always use their feet to catch prey. Like other birds of prey, females are larger than males. They are generally monogamous and form long-term pair bonds. Some caracaras build stick nests in trees, but most species in this family nest on cliffs, in other birds' nests, or in cavities, and typically do not add any nesting material. The female generally incubates the eggs and broods the young, while the male brings food to the nest. Once the young no longer need to be brooded, both parents bring food. Extended parental care is the norm for this family, as it takes a relatively long time for the young to learn to hunt. In Washington, one species from this family belongs to the caracara group, while the others are true falcons.
Rare winter resident.
Source of Bird Audio

The Gyrfalcon is the largest falcon in the world. Despite its size, it maintains a falcon-like profile with a long tail and long wings. Its wings are broader and more blunt at the tips than many other falcons. The plumage of the Gyrfalcon can take three main forms, white, gray, and dark, with many intermediate plumages. White adults have almost pure white breasts and bellies. The rest of their bodies are white mottled with brown. They have dark wingtips. Gray adults have gray upperparts with subtle darker mottling, and white underparts mottled with gray. Dark adults are dark-brownish overall above and brown streaked with white below. There is extreme sexual size dimorphism among Gyrfalcons, with males being only about 65% the size of females.

The Gyrfalcon's distribution is circumpolar. Gyrfalcons inhabit Arctic regions, from the northern coastal tundra to the edge of the boreal forest. They are often found in open areas with cliffs, and along rocky coasts and rivers. Wintering habitat tends to be more wide open.

Gyrfalcons are powerful flyers and pursue their prey in flight until overtaking them. They also locate prey while perched or in flight.

Large birds including ptarmigan and waterfowl are the most common prey item of the Gyrfalcon. They also eat rabbits, voles, small birds, and other mammals.

Monogamous pairs nest on the ground or on cliff ledges, sometimes in old nests of other birds. They do not build a nest of their own. Both adults incubate the 3-4 eggs for about 35 days, although the female incubates more than the male. The female broods the young for the first few weeks after hatching, while the male brings food. After the brooding period is over, the female also hunts. The young begin to fly at 45-50 days and become independent shortly thereafter.

Many Gyrfalcons remain in the far north year round, but the most northerly breeders are migratory. Immatures tend to move south in winter more than adults, and more of the birds seen in Washington are immature. The same may be true for females, as most of the birds banded in Washington (adult and immature) have been female.

In some parts of the world, Gyrfalcons are threatened by the falconry trade. While populations in some regions are considered threatened, the Gyrfalcon appears stable in North America where its range is fairly remote from human disturbance. In Washington, numbers have increased in newly irrigated farmlands in the Columbia Basin, but this may be a result of newly created habitat rather than an increase in population.

Gyrfalcons are rare visitors to open Washington lowlands from mid-October through March. In western Washington, the Samish Flats (Skagit County) is a good place to see them. 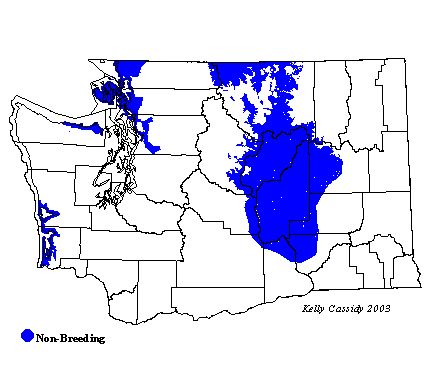